Muna Ali is pushing to add yet another arm to Gashanti Unity after identifying another gap: a lack of women-of-colour entrepreneurs. 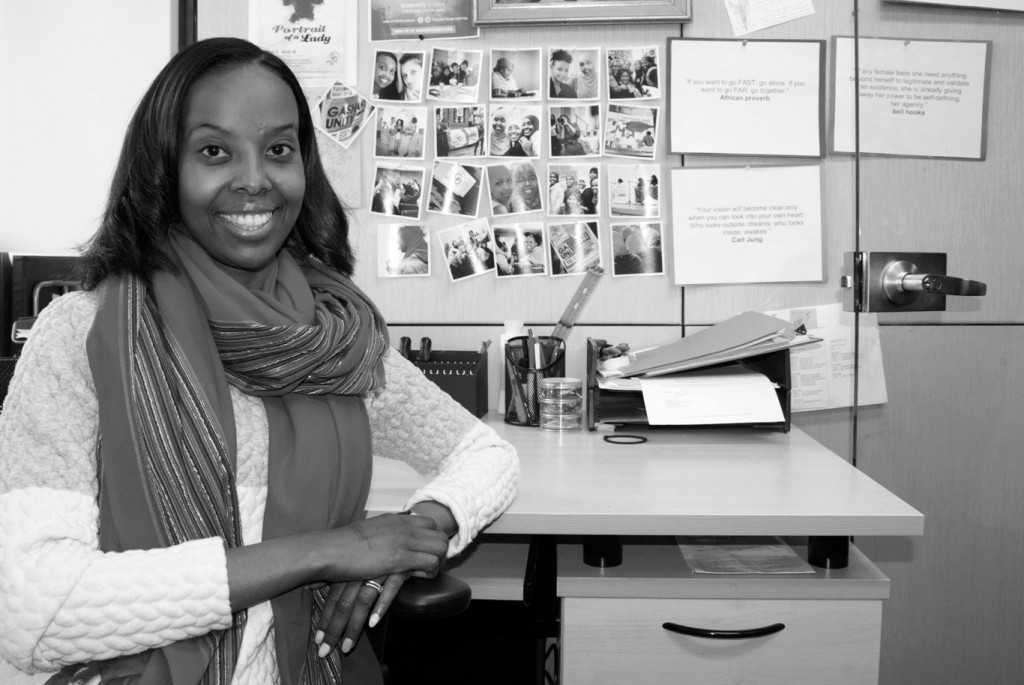 Muna Ali cut her entrepreneurial teeth before she even started grade school, “playing business” at the side of the road near her grandmother’s house in her birth city of Hargeysa, Somaliland. She identified her “market” of school children, recognizing what they needed (like candy, for example) and positioned herself strategically at the junction they all had to pass to get home to ensure traffic to her store. Though her store may have been make-believe, her budding entrepreneurial spirit was real.

“Since I was in high school, I noticed something about myself,” says Ali, 33, programming director and co-founder of Toronto-based Gashanti Unity, which has a budding social enterprise arm that incubates young Somali women entrepreneurs. “I wanted to create things that didn’t exist.”

In 2007, at age 24, Ali did just that. Along with her sister, Khadra, and five friends, she secured funding from the Youth Challenge Fund (established by the United Way of Greater Toronto and the province of Ontario to support youth-led initiatives serving racialized and marginalized youth) to launch Gashanti Unity, a grassroots community organization that supports young, first- and second-generation Somali women growing up in Toronto.

Gashanti Unity’s motto is “anchored in our culture, focused on our future.” Its name reflects the two identities the women it serves constantly straddle: their Somali heritage and Canadian youth culture reality. The group reclaimed the Somali word gashanti, which translates literally as “unmarried woman in pursuit of a man,” to instead mean a young woman in pursuit of her own personal development. They combined it with the word unity, a nod to Queen Latifah’s 1993 hip-hop hit “U.N.I.T.Y”, an ode to female empowerment.

The network of young women held monthly shah and sheekos (tea and talks), organized a day-long symposium for 100 Somali girls from across Toronto and created a leadership program called Tusmo: The Future Leaders. The aim is to redefine what success for Somali women looked like. “In our community, women are always putting themselves last, making the sacrifices,” says Ali, who points out that Somali culture has very different expectations of sons and daughters. For girls, it’s often enough to graduate high school and get married. “This is the one space where we’re like, ‘No, this is where you take up space, . . . where you dare to dream . . . dream to be that and something more.’”

Ali made documentary films that explored themes of identity and the intersectionality of being young, immigrant, Somali, Black, Muslim and female. In 2012, Ali and her sister, Khadra, were invited to take the films to the annual Hargeysa International Book Fair in the Horn of Africa and the Somali Week Festival in London, England. Ali and others from Gashanti were also being hired to film, photograph and DJ at Somali weddings—sparking the start of a social enterprise extension of their work.

Ali, who had earned a social service work diploma from Seneca College, began exploring ways to formally structure Gashanti Unity as a social enterprise and applied to the School for Social Entrepreneurs Ontario (SSEO). According to managing director Marjorie Brans, the school focuses on the individual, not the enterprise and aims to “help promising community innovators and emerging visionaries become the best leaders they can be.” Brans admits she was blown away by Ali’s application. “It just seemed like Muna had an easier time jumping in and moving ahead.”

Ali found herself surrounded by entrepreneurs trying to establish themselves in Toronto’s vast startup community. She learned how to pitch in Dragons’ Den–style challenges and how to create an “ask” for resources, such as help or funding from another organization or possible investor. “I realized that I can make people [nod their heads] while I’m talking,” says Ali. “They’re saying yes because I’m really evoking something.”

Now a graduate of the SSEO, a master’s student pursuing an interdisciplinary degree in education, gender and women’s studies, and humanities at York University, as well as a newlywed, Ali is pushing to add another arm to Gashanti Unity after identifying another gap: a lack of women-of-colour entrepreneurs and women of colour in decision-making and leadership positions acting as role models.

“Like it’s Oprah and that’s it,” she laughs incredulously. She recalls times she’s attended women entrepreneurship events in Toronto and spotted one woman of colour in the room. “I wonder what that would look like if I could see an [entrepreneurship] network of women who were all women of colour?”

In true Ali fashion, she is working hard at finding out what that will look like. Despite the fact that Gashanti Unity is currently 100 per cent volunteer-based with a small office housed inside the youth space of a Toronto Community Housing building, Ali and her younger sister, Hoda, 30, are now incubating seven young women entrepreneurs. The group, which includes four graduates of Gashanti’s Tusmo leadership program, is piloting an online podcast for young Somali women that discusses everything from race and ethnicity to pop culture.

Muna Dahir, 22, is one of the women being guided by Ali. “Even seeing people that look like you in a certain position is enough to spark being inspired to do your own type of thing because if you don’t have that representation, then you don’t see those possibilities,” Dahir says. Her friend Basma Deef, 21, nods in agreement. “So [Gashanti] really is a [role] model for Somali girls—they’re doing this, they’re grinding. They’re pretty big, to us at least,” Deef says.

And Ali wants Gashanti to get bigger. While mentoring the next generation of leaders to spearhead its community programming work, building the organization’s social enterprise capacity and applying for operational funding, she is also creating a leadership curriculum that can be implemented for Somali girls in cities around the world. She says that Gashanti has been her “playground,” providing an opportunity to explore, grow and learn. “I always like to say it’s about understanding that what got us here won’t keep us here.”