Who needs another online community? We do!

The $1 billion+ fragmented feminist economy comprised of feminist enterprises operating in all sectors to advance equity and equality for women, girls, trans, and queer folk is about to come together.

On January 5, LiisBeth Media, Canada’s only feminist business media enterprise with 2,500 subscribers and more than 19,000 online readers, is launching a new service, the Feminist Enterprise Commons (FEC), an online community built with Mighty Networks technology. It will enable the currently far-flung and splintered feminist enterprise community to come together in a safe, supportive, authentic, radical, change-led, and feminist-values-led space.

As part of the community, members will be able to connect, share valuable insights, ask important questions without outside surveillance, contribute tools, find relevant and new feminist research, and glean new insights to advance their own feminist practice, enterprise, and drive for systems change. They also have the opportunity to work collectively to further strengthen the feminist economy by resourcing, and sourcing from each other.

LiisBeth founder, PK Mutch, says, “We decided to build a new online community because we are increasingly unhappy with policies, bias, and breaches of trust by social network companies like Facebook and Google. Recently, Facebook randomly prevented LiisBeth from posting because they said our group site was too political. Apparently you can’t boost or promote a post about feminism’s point of view on current events without giving them your personal SIN number or driver’s licence. We challenged them on it, and the restriction was lifted—briefly. Still, that was the last straw for me. Once our new network gets going, we will be essentially using our LiisBeth Facebook channel to redirect people to a safer, online space.”

Mutch also adds, “We also aim to keep the community small and engaged. We are not aiming for thousands of phantom users.”

What is a feminist enterprise?

Feminist enterprises are typically founded by visionary feminist entrepreneurs, innovators, creators, investors, researchers, and social justice activists who leverage their entrepreneurial, leadership, innovation capacity, and creative skills expressly to not only create enterprises or projects that advance gender, economic, social, political, and environmental justice, but also to experiment with new ideas that can help us begin to conceive an alternative world beyond neo-liberal capitalism and patriarchy where all people and the planet can flourish.

At present there are no other feminist economy or enterprise-oriented networks in existence. Although, there are an increasing number of feminist business coaches popping up in the US.

PK Mutch explains, “Entrepreneurship is a tough path for all who pursue it to surviving or thriving economically in an increasingly unequal, precarious economy. Heavily promoted corporate responsibility efforts to address broken systems give the illusion that we are making sustainable progress, but the truth is lasting change won’t happen without the engagement of the rest of the economy—entrepreneurs and small enterprise leaders—in a conversation about what an economy beyond modern capitalism and patriarchy might look like.

Feminist entrepreneurs have all that to contend with plus the fact their ideas are marginalized because they challenge deeply held beliefs, and because, often, they move at the speed of humanity—versus the speed of technology.

Mutch adds “The feminist economy has been around for over 100 years (think bookstores and women-led credit unions in the 1970s), yet its work and leaders are systemically and frustratingly overlooked or appropriated without attribution. Most enterprises are grassroots in scale and strapped for time and resources, so finding each other and connecting has been difficult. We saw an opportunity to change that. Ultimately, we believe a stronger, more visible and better supported feminist economy leads to more well-supported experiments with alternative economic models and systems concepts. These tens of thousands of small but bright bonfires for real change will lead to the kind of radical social and economic changes we need to see if we are to ever leapfrog past our currently repressed ideas about the kind of world we have the power to make.”

Canada has a feminist government, feminist budget, and feminist foreign policy—and the Ministry for Women and Gender Equality (WAGE) in 2019 announced the historic $400 million Equality Fund, which combines international feminist grant-making with an innovative investment arm, delivering new momentum for women’s movements and supporting the advancement of gender equality globally. It makes sense that Canada should also be home to the world’s first visionary feminist enterprise community.

Mutch and her team envision that the FEC is intended to become a global community over time.

Built on the Mighty Network platform (founded and led by Gina Bianchini), FEC is a space where founders, project leaders, and aspirants can freely ask questions and, with the help of others, refine their ideas about how to flourish differently without fear. A core feature of the community will be the “Feminists in Residence” program. The program will bring in feminist thought leaders who are experts at specific topics and tools like “feminist marketing” or “feminist business model canvas” to share their expertise and will offer exclusive member-only workshops. 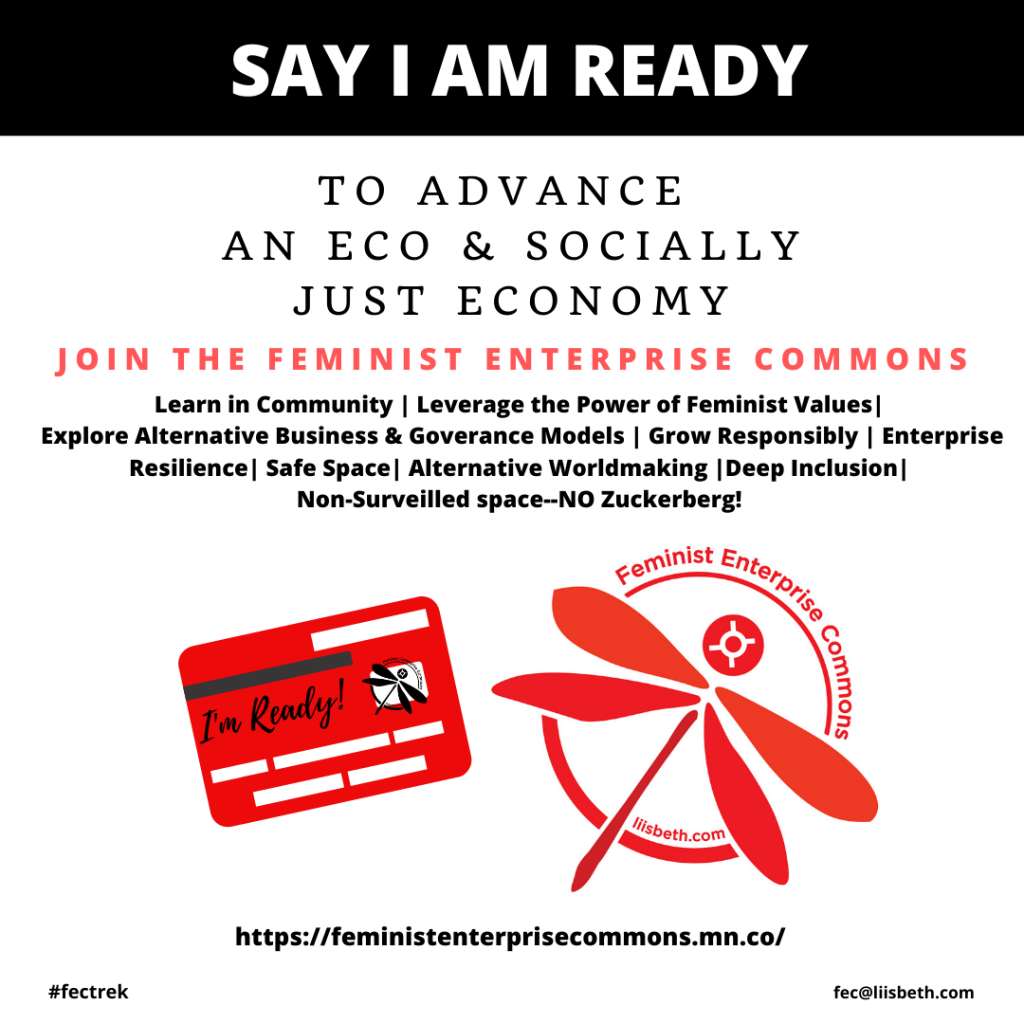 Investors, funders, and individuals or organizations with resources to share are also encouraged to sign up and support inspiring founders and transformative ideas that they believe in.

“So many corporations and impact investors are working to support gender equity these days but end up creating their own initiatives to do so instead of finding and investing in feminist enterprises or organizations that are already out there doing this work. The Feminist Enterprise Commons would create an opportunity for them to go to one place to find existing, experienced investees or partners instead of spending time reinventing the wheel,” says Vicki Saunders, founder of SheEO.

Elize Shirdel, a feminist tech entrepreneur, says, “When one decides to create a feminist enterprise, it’s easy to feel alone out in the world. Feminist enterprise communities are cross sectoral, grassroots in scale, fragmented, and widely dispersed. Access to aligned startup and growth funding for promising but radical ideas is extraordinarily difficult. This keeps our voices small and weakens our ability to thrive while doing countervailing work.”

Valerie Fox, founder of the Pivotal Point and a LiisBeth advisory board member, says, “I believe in the power of well-connected innovation ecosystems to change the world. So I am excited about this idea. We need feminist enterprises to lead the way if what we want is the ability to imagine what else is possible socially, politically, and economically. It’s especially important to flow investment towards these sometimes ‘hard to love’ enterprises because they work hard to deeply challenge our assumptions about a system that, frankly, works well for some people, but not all.”

Nancy Wilson, founder of the Canadian Women’s Chamber of Commerce, says, “The Feminist Enterprise Commons is a great idea. It seeks to connect unique types of enterprises and leaders with a feminist point of view. Not all women are feminists and not all feminists are women. If they are successful, they will not only be able to strengthen themselves, but also increase their ability to attract resources and influence policy.”

Mutch adds, “This is not a women’s empowerment or women’s booster network. It is an intersectional, queer and trans-inclusive, pro-reproductive rights, and social equity-oriented feminist space where existing systems are critiqued, dismantled, and new status-quo-busting novel concepts and ideas are worked out.”

The Commons is operated by LiisBeth Media, a division of Eve-volution Inc., a for-profit social enterprise and certified B Corporation. However, LiisBeth Media will be spun off into an independent cooperative by June 2020.

Commons host PK Mutch says, “It goes without saying that the leadership, ownership, governance structure, and community conduct agreements will be ultra transparent, developed participatively, accessible, responsive, caring, inclusive, in other words, feminist in every way. We are very clear that we are not going to build another ‘ghost town’ community network enterprise where frankly, the members in the end, are the product, versus the other way around.”

Mutch adds, “We won’t be perfect, but we will be human. We will work through any stumbling blocks along the way together.”

Subscribe!
You will have access to Payments processed through PayPal.
Funding
You can also contribute to our “Sustainability Fund” or an open donation in any amount.
← Time’s Up Tech
News So White It’s Blinding →