Boosting the gender equality and equity needle at events and festivals requires organizers to get out of their comfort zone. 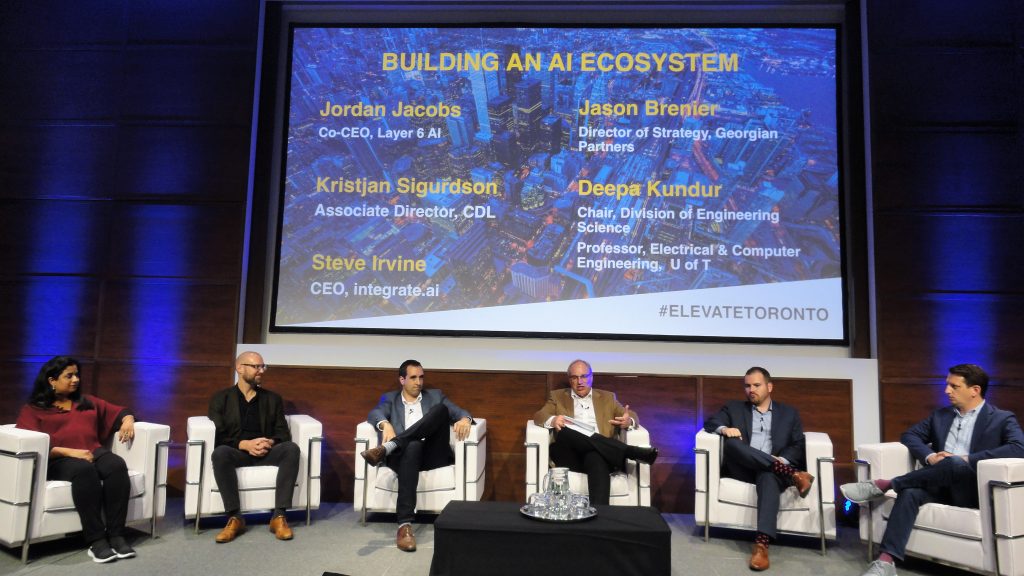 On day two of Elevate Toronto, Deepa Kundur, the lone woman but easily the most heavily credentialed expert speaker on a panel of six, sat on a stage in front of a welcoming, mostly male audience of 200. The session titled “Building an AI Ecosystem” lasted for 45 minutes. Kundur spoke for approximately five.

The event was part of Elevate Toronto’s inaugural three-day tech conference touting diversity and inclusion and it promised a “diverse” panel to explore how AI will change the future of work and life. This panel featured the usual: five white men. And there was Kundur, a South Asian woman who also happens to be the chair of the engineering science division at the University of Toronto.

When questioned by the male moderator, Kundur offered a thoughtful response to a knee-jerk comment about a young woman planning to skip university and join a startup directly because she wanted to “do what I want to do” and “university is not going to teach me the tools I want to know.”

After the audience’s muted laughter died down, Kundur spoke: “It’s easy to learn tools. But it’s not easy to build character and be educated about the responsible use of AI. I think character is important and is becoming a very important consideration in building an AI ecosystem. This is going to create stability. It’s important to get out of our comfort zones to develop character.”

It’s fair to say that Elevate Toronto, while promising to promote diversity and inclusion, stayed well within its comfort zone. One attendee, Janice Sousa, vice president of business development at Merit Travel, expected to hear challenging discussions, like how leading tech companies in Toronto are using diversity and inclusion as a lens to work through; honest examinations of the ethical implications of AI; and how the negative implications of AI can be countered.

Needless to say, Sousa left disappointed. “It was more a celebration as opposed to the work to be done,” she said.

By the end of day two, even Elevate Toronto’s CEO Razor Suleman was admitting the conference came up short of its mission. “I don’t think we did a good enough job of finding the champions of diversity.”

Kathryn Hume, vice president of product and strategy at Integrate.ai and panelist at Elevate Toronto, had some suggestions: Joelle Pineau, who co-directs the Reasoning and Learning Lab at McGill University; and Fei Fei Li, director of Stanford University’s Artificial Intelligence Lab. “That’s just a few women, but these are leaders in the field,” says Hume.

Pineau champions the cause of making AI mature. One of the biggest challenges she tackles is the lack of diversity in AI not just in terms of gender, but also demographics, social backgrounds, and cultural communities. The lack of diversity creates narrow AI ecosystems, arguably like those on display at Elevate Toronto.

Renowned AI researchers Fei Fei Li and Olga Russakovsky at Princeton University spearheaded the creation of SAILORS (Stanford Artificial Intelligence Lab Outreach Summer), a program devoted to increasing financial and cultural diversity in AI. Its junior achievers program focusses on the growth and education of ninth graders by providing them with hands-on AI experience and mentorship. Research shows that the ninth grade is when students are most likely to think seriously about their college majors and their impact on the world.

Deborah Rosati, a corporate director for Sears Canada and the co-founder and CEO of Women Get On Board, is another diversity expert who wasn’t invited to speak at Elevate Toronto. Her area of expertise is corporate governance in the AI startup culture. “AI companies need to have a longer-term view when building boards and structures,” says Rosati, who was recognized by the Canadian Board Diversity Council on its 2014 Diversity 50 list. Often consulted by tech companies on how to build diverse advisory boards, she says these requests often lack foresight and they’re based on an immediate requirement to fill a short-term need. Consideration of issues like sexual harassment and lack of gender diversity are fundamental to AI talent acquisition, and therefore, discussions of it would have to begin at ground zero: the development of long-term AI governance and ethics structures. “It’s a sexy thing to have an .ai domain name. But the field is evolving very quickly, so no one knows what the end game is.” She says long-term governance and ethics committees need to be in place to identify gender gaps in existing tech boards to build teams that are diverse in skills, geography, gender, and accessibility.

To underline Rosati’s point, Osler Law’s 2017 Diversity Disclosure Practices reported that the percentage of women directors at TSX-listed companies moved at a “glacial” pace from 12% in 2015 to 14.5% in 2017. The technology sector lagged even further with only 9% of its governance represented by women directors.

Elevate Toronto had positioned itself as a leading space in the AI revolution in Toronto, which should have entailed not only looking at new discoveries and algorithms but how those innovations impact future unemployment, inequality in wealth distribution, and humanity itself. That consolidated approach to AI would require interdisciplinary panels comprised of sociologists, psychologists, anthropologists, ethicists, economists, and law makers, in addition to the usual suspects, computer scientists and deep-learning experts.

On that note, some Elevate Toronto panelists, such as Gary Bolles, came across as positively entitled.

Tracey White, a Toronto-based senior HR professional and economist, participated as an audience member and could not believe what she heard when Bolles, who writes and thinks at the intersection of disruptive trends, offered advice to displaced workers in the American manufacturing industry. “Bolles called these people negative externalities,” says White. “It’s as if he means that we should all build lucrative tech businesses and maximize shareholder value while broad swathes of the American population, who have lost their jobs to AI and living in trailer parks, can just be discarded as negative externalities. That kind of thought is unacceptable.”

Bolles is heir to the fortunes of his father, Richard Bolles, who wrote the bestselling career counselling guide, What Color Is Your Parachute? His advice to unemployed workers in the American rust belt who had been displaced by AI automation was more lead balloon, telling them to pull up their bootstraps and become life-long learners by hiring coaches. The rest of the panel did not question him on the socio-economic—or political ramifications—of his off-hand statement. Angry and despairing, those so-called “negative externalities” in the rust belt heard Donald Trump’s promise to bring back their manufacturing jobs and helped make him president.

Perhaps more diverse panels would have challenged Bolles, or challenged Elevate Toronto’s celebration of tech innovation, which too often glossed over the warts and blind spots. As tech thought leaders Elon Musk and Stephen Hawking have increasingly been pointing out: technology is not benign.

But there’s always next year. As Julie Hanna, a leading Silicon Valley tech entrepreneur and Elevate keynote speaker, says, “Elevate is a profound opportunity. What’s important is to not think about it as an event but an ongoing dialogue; what worked well, what did we learn, what could be done to make this more inclusive.”