“As a business owner, one of the cool things about trying to keep a place like this alive is it forces me to be really creative at the end of the month. It forces me to invent things out of necessity. Some of the things we invent become a huge part of what we do.” –Savoy Howe

Savoy “Kapow” Howe is the owner of Canada’s first woman-owned boxing club for women and transgender people. Toronto Newsgirls Boxing Club is a sole proprietorship with 12 volunteer coaches and 250 members. In 2007, Howe worked with Brock University professor Cathy Van Ingen to develop the Shape Your Life program, offering free boxing to hundreds of survivors of violence at her gym. In Part Two of this two-part interview, Carmelle Wolfson spoke to Howe about Shape Your Life, coaching people with disabilities in her gym, and making the space more trans-inclusive. You can read Part One here.

CW: How did the Shape Your Life program for survivors of violence get started?

SH: That started when one of my students who happened to be a professor at Brock took one of my boxing camps. After the camp she said, “Savoy, what you’re doing is incredible. Would you consider doing this for survivors of violence?” I mean, I was already doing it for survivors of violence, but she wanted to have a program specifically for that. So we got our first two-year grant from the Attorney General’s Victim Services Unit and that helped us set up the program in 2007.

Shape Your Life isn’t offered here anymore. It ended in April. They decided to take a new turn and moved to the west end to the Bloor Street Boxing & Fitness Club. I always say crisis equals opportunity or when one door closes another opens. So we’ve decided to do something like Shape Your Life, but upgrade it a bit.

The program we are starting is called Outside the Ring. Our goal with that is to give two four-month memberships each month to four different communities: Indigenous, new Canadians, LGBTQ2S, and people with mobility issues. It’s all based on donations. The four-month membership will allow them to come as much as they want, and then who knows? If our fundraising goes well, if they want to keep going, maybe we’ll be able to give them another four-month membership. It’s hard when you give somebody a membership with a run-out date and they really want to keep going but the funds aren’t there. How can you kick somebody out just because of money, especially if it’s having an effect on their lives? So we do a lot for free. Even with Shape Your Life, we gave away over $10,000 worth of boxing to graduates.

CW: Have you had many people with mobility issues doing boxing?

SH: For a boxing club, yeah. We’ve done a workshop for 10 people with mobility issues. Then some of those became regular members. In the past few years we’ve had about five people who happen to use wheelchairs. We’ve had a visually impaired woman box with us. That was so much fun to figure out how to do because I love inventing. When you work with people in wheelchairs, you have to invent things. How can they do abs? Okay, you put rubber bands with a strap behind them and they pull away.

CW: How did you develop that training for people in wheelchairs?

SH: I came up with a lot of it. I worked for 16 years as an attendant to a woman who was a quadriplegic. She was an advocate for people with disabilities, so we travelled all over Canada and the States. She would present at conferences and I would be her attendant. She said, “Savoy, if you ever open a boxing gym, it has to be wheelchair accessible.” So that’s why we made sure speed bag racks are height adjustable, double-end balls are height adjustable. There are a couple heavy bags at the height where somebody in a wheelchair can get under them and get close enough to punch. I’ve just been working with people with disabilities for a long time. When I understand their limitations, we just figure ways to strengthen what they can use. Like I said, I love inventing. So give me a situation and I’ll figure it out.

The gal who is visually impaired, with shadow boxing she would take up lots of space, lots of footwork. The worst thing that was going to happen in the ring was she was going to touch a rope. She loved it because in life she’s always so careful with her stick. In there, she could just fly around and touch rope. When she was done she’d say “Savoy” and I’d come get her. She’d take me by the elbow and I’d give her stick to her. Often, people would be looking at her going, “Is she blind?” They had no idea she was blind because she loves to move. And she’s good. Just another thing that we invent that works and it’s good for her.

CW: How do you think a boxing club run by a woman is different than one run by a man?

SH: My priority with Newsgirls is to create a safe space. Safe? What do you mean? It’s boxing! But I mean a safe space so that people who might not normally come into a boxing gym will come here. Usually when people come here, they’re pretty nervous. But within the first hour they get a sense that this is different. Nobody is judging me. Nobody is doing anything that is scary to me. We just make sure it’s a really safe environment so that everybody can come in, including the trans community. 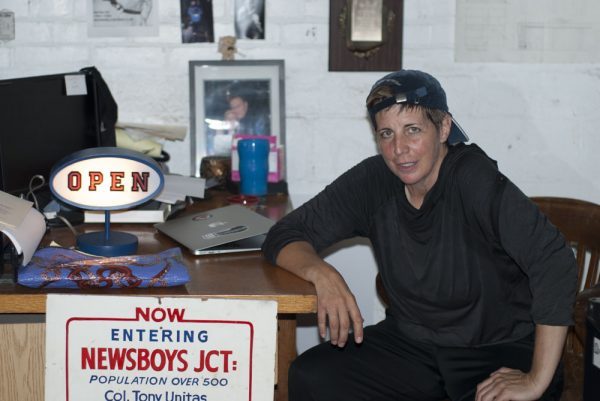 I spent 14 years in men’s gyms. You walk in there and you’re walking into a mist of male aggression. I think that’s really important for men because you’ve got to be willing to deal with your fears in a male-aggression way. If a guy walks into a male gym and he can’t handle the male aggression, he should be willing to get used to it, adapt to it. A lot of women walk into that environment and are like, “Nope, not for me.” Some of them might stay and have to slap knuckles and tell the men, “Don’t touch me.” Then they might leave. Some women will stay. They’ll fall so in love with the heavy bag that they’ll be like, “No, I’m going to be here whatever it takes.” It’s just a totally different environment. Male aggression is so different than female aggression. Well, I always call it female, healthy aggression.

You wouldn’t see that male aggression in here. When my fighters are getting ready for a fight, I will take them to other gyms so that they can see what that is like. It just keeps them a little bit safer in the ring because a lot of the women that are going to be competing against my gals are coming from male-dominated clubs.

As far as running the business, I have no idea. I have no idea how the owner kept the gym alive. He was charging people $40/month, month-to-month. You can’t survive that way because half the time people don’t pay you. You need a wee bit more of a commitment from people. But that’s boxing. A lot of gyms charged their members $40/month in the old days up until 10 years ago.

CW: Do you have any rules of conduct to make it a safer space?

SH: We have a trans inclusion policy, which you can find on our website. I am looking forward to looking at the code of conduct from a friend at a martial arts studio to see if that’s something I should have in place. But we haven’t got many problems. People get the vibe when they’re here that they’re not to disrespect anybody.

CW: What have you done towards trans inclusion and how has that approach evolved?

SH: When a few of my boxers transitioned, I wanted to still be able to provide a place for them to box. When we moved over here, that was when I was like, “Okay, let’s have one night where it’s co-ed.” Then the women would go home and tell their husbands, “Oh my God, it’s so much fun.” And the husbands were like, “Hey, we want in.” By that time, some of our trans athletes were saying, “If I ever wanted to train for a fight, how? I can’t. Once a week isn’t enough.” So then we opened it twice a week, and eventually three times a week.

Before we moved here, one of my athletes came to me and said, “Savoy, I’d like to compete.” I said, “Okay.” She said, “But I have something to tell you. I was born a man.” I was like, “Oh okay, I don’t know how this works. Let me call Boxing Ontario.” And they said they follow International Olympic Committee rules, and if these things have happened around IDs, hormones, and surgery, you’re good to go. So she fought the first bout for a trans woman athlete in boxing in Canada, as far as we know.

That’s when we started doing more outreach. Some of my boxers transitioned. We came here. We put a trans policy in place, and we started doing outreach through Shape Your Life. Any time we had new dates, we’d send it to the 519 Community Centre and Sherbourne Health Centre. I think it was mostly by word of mouth after that. Anytime I have a chance to talk to media, I always mention that so that anyone reading the article will know.

CW: Is there anything else you’d like to add?

SH: As a business owner, one of the cool things about trying to keep a place like this alive is it forces me to be really creative at the end of the month. Like, how can we come up with this amount of money in under a week? It forces me to invent things out of necessity. Some of the things we invent become a huge part of what we do.

The most recent thing we invented was called the one-two combo. It’s boxing for moms and their 10-to-13-year-old daughters. We just did the pilot of it, getting it ready for when kids are back in school. I’ll work with the adults. I have a coach who will work with the kids. We’ll work at the same time separately, and then for the last half hour we’ll bring everybody back together to do some bonding between the moms and their daughters. We’ll do an eight-week session and we’ll see how it goes. I think it’s going to work. I think parents are ready to have their little daughters in something like boxing, just with how the world is going.

And the same with Outside the Ring. Shape Your Life pulls out, takes their funding with them, and it’s like, “Holy shit. What are we going to do?” So I just do lots of writing. That’s how I solve things. I would think of what the best-case scenario would be. What if we have another new and exciting program that has a similar feel, but maybe serves a different population? How are we going to fund it? I have no idea. What if I could get a certain amount of people that would donate $5/month and we’ll call them Newsgirls Sugar Mamas? We include all genders, so Sugar Mamas/Glucose Guardians. It reignites a certain excitement about being an inventor.

← When a Catalyst Becomes an Inhibitor
LiisBeth Dispatch #32 →

One Response to Savoy “Kapow” Howe Outside The Ring: Part Two